This page will be a resource for you to learn all there is to know about bed bugs. Doctor Sniffs is a NYC based K9 inspection company and we want you to be informed about bed bugs, their habits, breeding cycles, and more. The more knowledge that you have, the better you will be at eradicating them.

What are bed bugs or chinches?

Cimex lectularius Linnaeus is the scientific name. Adult bed bugs are wingless insects 5-6mm in length. They are small brownish red insects that can be either flat or bulbous, depending on when they last had their blood meal. Bed bugs feed solely on the blood of animals.

Close up of cimex lectularius on corrugated recycle paper.

Where do bed bugs come from?

Bed bugs are ancient insects that studies have proven to have lived with humans in caves, first parasitizing bats, then moving onto humans. There have been reports of bed bugs in Greece, Egypt, Italy, China, and many other countries since the earliest known civilizations began. England’s first documented bedbugs were reported in 1583.

Bed bugs were almost eradicated for a 50-60 year period after WW II. A Swiss chemist named Paul Hermann Müller discovered DDT and the power it had as an insecticide. Paul Hermann Müller was awarded the Nobel Prize in Physiology for his discovery of DDT being a contact poison for several arthropods. One reason why DDT was so effective is that it has a very long residual effect. When it is applied to a surface it will keep on killing the bugs for months. If the bugs are hiding in a crack for 7 days and then come out to feed they will, in turn, walk through the DDT and die. DDT was banned in the US in the 1970’s, due in part to Rachel Carson’s book Silent Spring. It is now classified as a probable carcinogen to humans and is no longer used in most of the world. Currently, DDT is still used in the fight against malaria in a few countries, most of them in Africa.

What is the life cycle of a bed bug? 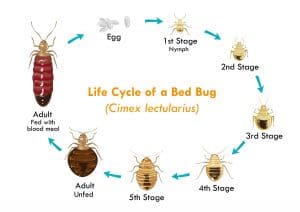 Bed bugs go through 5 stages after hatching and before reaching adulthood. Each stage the bed bugs enter they are able to feed on us. Once they shed their skin they move onto the next stage.